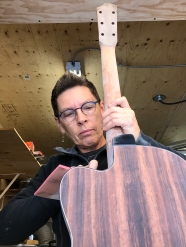 Peggy White’s determination shows in her work as a luthier. Her crisp, modern designs seamlessly balance their contrast of the rich depths of the wood grain. Guitar building is an exacting task. However, simply getting in the shop was Peggy’s toughest challenge, the rest is just music.

Peggy first wanted to take woodworking as a course in high school but was told she could not because she was a girl. Instead, she was directed to Home Economics.

“I think early on I didn’t believe woodworking was something I could do, as a woman, even though I was really interested in it,” she said, “As I grew older I started challenging the idea that women were not suited for certain careers.”

She finally decided to take her first woodworking course in 2011 in guitar building.

“I started building guitars when I was 51 years old, by that point, confident that I could do whatever I set my mind to,” she said.

Now Peggy spends her time in Almonte, Ontario, Canada, just west of Ottawa. It’s a small town of 6,000 people that seems to “call” artists and creatives to move there. Many of her neighbors share her artistic inclinations. “It’s a pretty magical place,” she explains.

Peggy spent the recent holidays completing two orders and started the new year on three new builds. Her favorite tool is a toss-up between her Lie Nielsen block plane and her Japanese chisel.

It’s a fortunate thing that Peggy finally followed her passion. Her work shows the restraint and patience of a great luthier in well-composed bursts of color as an artist
that has finally been allowed to lay down her long-awaited and detailed vision.

Her work may be progressing quickly, but Peggy still thinks there is much to be done for women in the professional world. “While things have come a long way since I was a young girl, I think we still have a ways to go in instilling the confidence in young girls and women that they can do whatever they want career-wise.”

To view more of Peggy’s work or get in touch: