Sarah Marriage didn’t always know she was meant to be a woodworker. Like most of us the craft sort of found her. In Sarah’s case it was after attending Princeton for architecture as an undergrad. Also like most of us, she yearned to actually make something. Marriage quotes architectural theorist Robin Evans as one of her main inspirations towards becoming an artist, “Architects don’t make buildings; they make drawings of buildings.”

Marriage wanted to design and make something herself using the human scale that inspired her so. She wanted to know that her materials were ethically harvested or produced and that “the other labor with whom I collaborated was treated as well as I treat myself.”

Furniture became her new focus. She moved back to Alaska, got a day job and an apartment and set up her shop in her parent’s heated garage. She didn’t know how to build furniture, but she was going to learn.

She started off by purchasing “throw-away furniture from Anchorage thrift stores” that she would take apart and and reassemble according to her own design. Hours were spent in bookstores reading anything she could get her hands on to strengthen her knowledge. One day she picked up a book by James Krenov, and his words secured her desire to continue on with furniture making.

Marriage returned to the northeast where she resided in New York City as she worked for Guy Nordenson and Associates Structural Engineers. She then spent a year with her brother and his wife in Baltimore as they rehabilitated their 19th century town home. She also applied to the College of the Redwoods during this time, nearly a decade after first discovering her passion for furniture making. She spent two years there in California and then headed back east where she now shares a shop in Hoboken, NJ with other talented makers, including Thomas Hucker and cuddly Frank the shop cat. 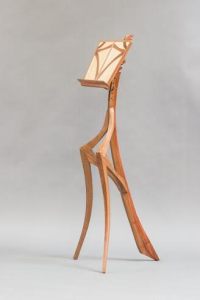 Marriage pointed out that “in any zone, it seems people have different expectations of men and women,” but also mentioned the different paths that are often taken between the sexes within the craft. “A lot of female woodworkers, including myself, came into our field through art and design education. The traditional pathway to furniture maker, beginning as unskilled labor and working one’s way up through the field to master woodworker: this is typically (not always but typically) a path unavailable to women,” noting that the number of women in the field who started in the traditional shop route are much lower than women who went the academic route.

“Gender isn’t an issue,” says Marriage when she is in the shop or at a school. In other realms of the industry, perhaps a lumber yard, treatment can be much different. “Two weeks ago I went to a new lumber place with another female furniture maker. The first person who interacted with us, as we walked into the yard said “Woah woah where are you goin’?,” thinking we were lost.” 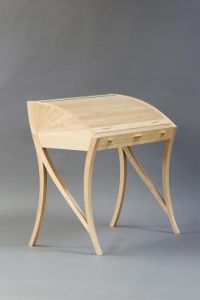 She also isn’t afraid to point out that she does accept the extra help when needed, “I have a bad back, and will take as much help as I can when it comes to lifting large planks, but beyond that the help is usually unnecessary, and wouldn’t be offered to a man, and at the end of the day I just want to be treated like the competent woodworker who I am.”

Despite a few negatives encounters over the years Marriage feels like her experiences have been beneficial and mostly for the better. “Over all, I think that I have been lucky. I’ve had predominantly positive experiences. I’ve been put in a handful of rather uncomfortable situations, but I’ve never had anyone actively work against me because of my gender, and often I find that there are strong advocates out there in the world for women woodworkers. We’re also pretty good at sticking together.”

While Marriage doesn’t feel like she currently explores gender within her own art, she is interested in expanding ideas of how we determine the gender roles we try to assign within the styles of our work. “I find it fascinating when I am showing my work in a public setting, like an exhibition opening, that people will discuss the furniture itself in gender terms. ‘That’s beautiful, but that wouldn’t work for me… it’s a lady’s desk, right?’ These kinds of comments happen a lot. People seem to seek out gender in objects (‘is this a his-and-hers set?’), and I encourage broadening those expectations (‘it could be his-and-hers, or hers-and-hers, or his-and-his, or just completely unpaired!’).”

For the future of women in woodworking Marriage thinks growth, reflection, and hard work are the key. “I would like to see more female woodworkers. To me, that’s the crux” she says. “If there were more female woodworkers the field would be more welcoming to female woodworkers. Of course that’s a chicken-egg situation, so I think the next steps are about both encouraging girls to consider pursuing our field and also looking at our own biases, our own expectations of what people are capable of or might be interested in and working to change those expectations at the same time.”

Marriage has an array of events and projects coming up. She’ll be featured at the prestigious American Craft Council Baltimore Show February 20 – 22nd as part of their HipPop program that features emerging artists. She’ll also be serving as the technical assistant to Jennifer Anderson during the “Environment as Muse” furniture course at Haystack Mountain School of Crafts this summer.

Marriage is also a writer within the craft. She is the co-editor and co-founder, along with Luke Cissell and Cara Sheffler, of Works & Days Quarterly, “an online quarterly of arts, letters, music, and no small amount of craft.” While still in school she published her essay A Call to Practice about learning to be a woodworker.

View the landing page and other interviews for the Women of Woodworking series here.

One thought on “Women of Woodworking – Sarah Marriage, Hoboken, NJ”